Contemporary by Angela Li is proud to present “Dear me,” a duo exhibition by Hong Kong artists Fatina Kong and Kwong Man Chun.The exhibition centres around the theme of memory articulated with the artists' unique aesthetics. Through overlaying colours and mediums within their canvases, both Kong and Kwong visually represent the hazy and distant scenes within one’s mind –– which could be a piece of memory, or a dream that is at times scattered or placid in the depths of one’s consciousness. The exhibition opening will be held on Thursday, 13th January 2022 from 5:00 to 8:00 p.m., and will remain on view till 26th February 2022.  Both artists will be present at the opening.

Fatina Kong skilfully fuses contrasting elements of Chinese, western, ancient and contemporary techniques, as well as different subject matters in her works to create tranquil yet mysterious scenes of Hong Kong. Kong’s incorporation of the traditional Chinese ink painting technique of “leaving blank”, along with her use of mineral pigments and resin, create a mixture of layers and textures that emphasise depth in her works. Thus, it recreates how memories are constructed by the entanglement of different sentiments and experiences. Notable sights of Hong Kong such as the IFC building and Shing Mun River are also nuanced into her works, giving a sense of familiarity amidst the visual estrangement conjured in her canvases. Along with her choice of colours, her picture planes are bestowed with a transparent, jade-like quality that echo with a poem from the Ming dynasty, “flowers in a mirror and the moon’s reflection in water”, in which the transience of beauty is highlighted through the hazy, dream-like depiction of the Hong Kong cityscape.

Kwong Man Chun in his creative renditions plays with the depiction of the past and memories that enfolds it. His works include a plethora of objects that recalls his past, such as archaic structures, nostalgic furniture and Chinese courtyards. The artist superimposes his former residence in Huang Cen Ling, China with his present home at a tenement house in Hong Kong. Through Kwong’s choice of a demure palette, he adds a sense of mistiness to his canvases that interweaves memories with imaginary scenes.  The imageries also guide viewers to immerse themselves in memories that awaits excavation. The sense of nostalgia and the search for an unforgotten past conveyed in his works coincide with an important element in Chinese aesthetics –– embedding emotive expressions within depictions of scenery. 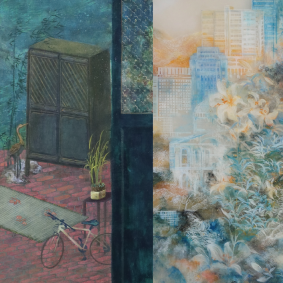